Quaternary ammonium compounds (QACs) are active ingredients in over 200 disinfectants for use to inactivate virus. The amounts of these compounds used in household, workplace, and industry settings has very likely increased, and usage will continue to be elevated given the scope of the pandemic.

The general formula of quaternary ammonium compounds (QACs) is as follows: 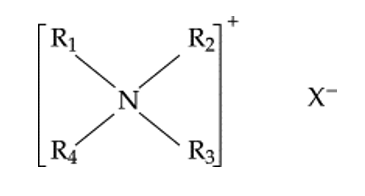 Menschutkin reaction is the most most common synthesis method of quaternary ammonium salt. Unfortunately, the most reactive alkylating agents in the Menschutkin reaction, namely iodides and bromides, result in the less desirable phase transfer catalysts. Consequently, an array of exchange reactions have been developed for the quantitative transformation of one ammonium salt into another. Frequently procedures have been reported for the synthesis of hydrogensulfates, chlorides, hydroxides, fluorides and carboxylates[1].

More commonly known as TBAHS, tetrabutylammonium hydrogen sulfate is a stable and hygroscopic white solid which is widely used in various fields of chemistry as phase-trans-fer catalyst (PTC) and ion-pairing reagent as mobile phase additive in HPLC. It has been also used in a variety of organic transformations, some of which include the syntheses of triaryl pyridine, N-monosubstituted α-ketoamide, cyclic and acyclic β-disubstituted, α, β-unsaturated ketones, 1,8-dioxooctahydroxanthenes, etc. 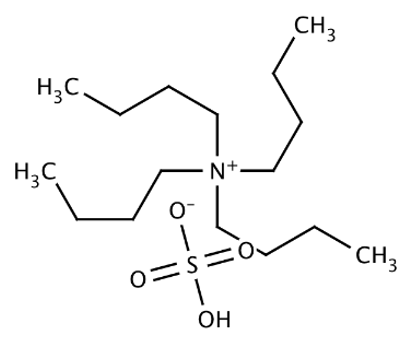 Alfa Chemistry offers various of acid radical quaternary ammonium salts including HSO4- series, SO42- series, CH3COO- series, PO43- series, HPO42- series, H2PO4- series, etc. You can search the CAS No. or chemical name on our website. If you cannot find them, please feel free to contact us for custom synthesis.